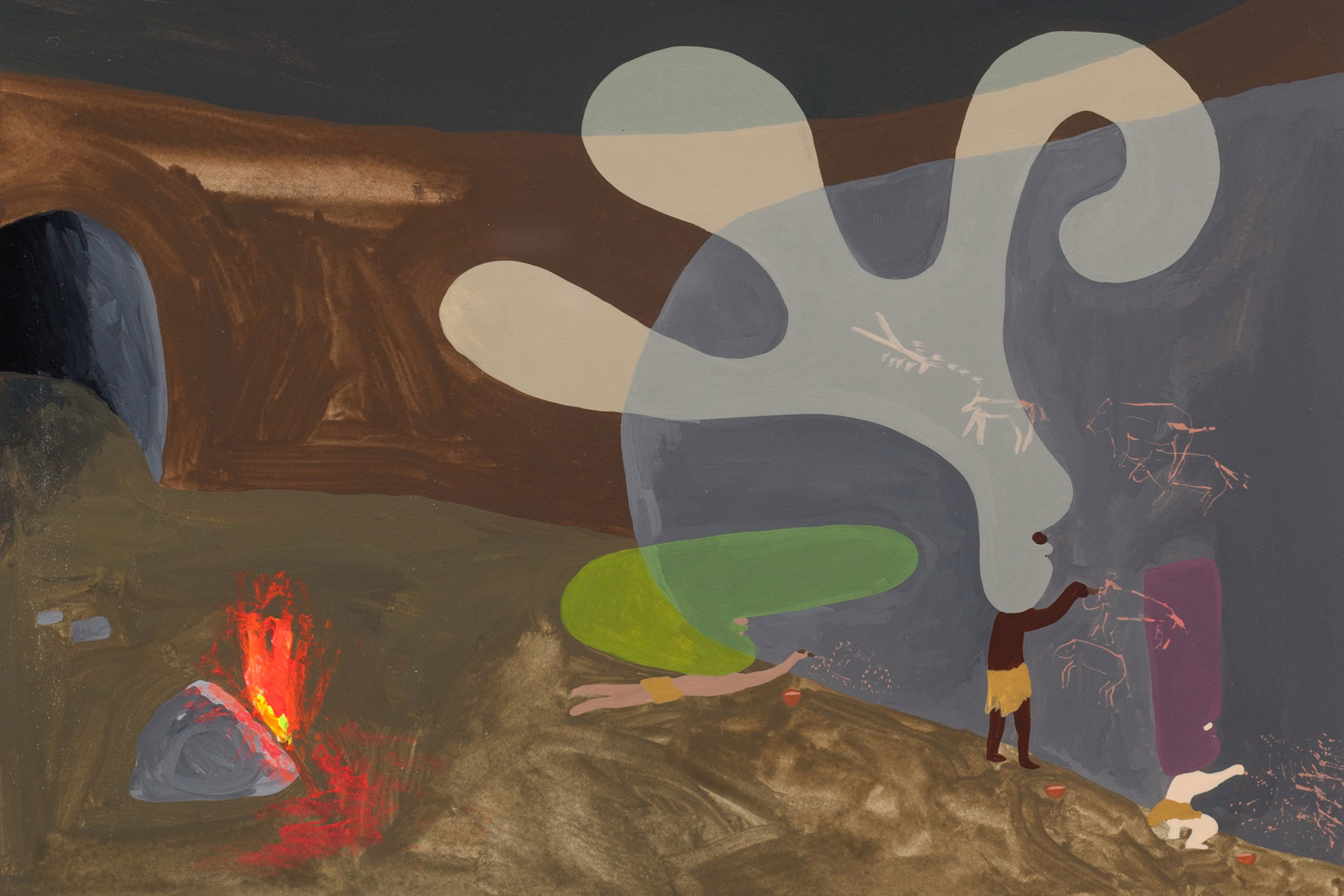 Peter McDonald embarked upon an artistic venture in 2011 which, ultimately, gave rise to Noh Masks, a series of 12 works on paper which Belmacz Gallery is pleased to present from 27 November 2012. Invited to be the first overseas artist to develop a grand scale project at the 21st Century Museum of Contemporary Art, Kanazawa, McDonald commenced a year-long odyssey occupying this contemporary art space in the capital of Ishikawa, Japan. Peter McDonald: Visitor featured a dynamic artistic programme through which McDonald utilized the exhibition space as a stage.

Responding to everyday encounters and experiences through drawing and painting resulted in new territories being mapped in McDonald’s painted universe. Noh Masks portrays everyday scenarios evoking urban life, primitive culture and Noh theatre. In some works traditional masks brandished by Noh performers hover outsize and seemingly illusory amidst McDonald’s typically animated imagery. The play on proportion with the theatrical prop and lush colour suggests with wry intensity and subtle grace a sense of the inherent spiritual power with which the Noh mask is believed to be imbued.

“My paintings have a cartoon-like simplicity and waver at the point where figuration might tip at any moment into abstraction,” McDonald has explained. “By making use of archetypes, symbolism and our irresistible tendency to make the strange readable, this alternative world operates like a parallel universe, with a very familiar logic and practices. This utopia may be a vision of an ideal world in the future or a simplified and optimistic version of the one we already know.”

“Peter’s sense of colour evokes a feeling of joy,” adds Julia Muggenburg. “Peter is a story teller. Depicting a narrative with a cast of characters — who in these works function as spectators – the mundane becomes epic.”

Peter McDonald was born in Tokyo, Japan in 1973. He studied in London at Central Saint Martins and the Royal Academy Schools. He has exhibited internationally and captures the act of painting as performance. In 2002, while painting a series of works based on performers on stage, a character with a large head appeared. Thereafter, with the image of this character at the core of his visual language, he expresses everyday situations with abbreviated iconography and rich colours. McDonald has also referenced historical painters at work. For his painting Fontana — which refers to the work and practice of the Italian painter Lucio Fontana — McDonald received the 2008 John Moores Painting Prize.

As artist-in-residence at Southwark Underground station in 2009, McDonald produced two paintings for the billboards outside the Tube station nearby Tate Modern. The large scale works “play with the idea of transforming the public space into an art gallery.” A selection of McDonald’s “hallucinatory” studies evoking daily life at Southwark station was also produced as badges for staff and customers.
Peter McDonald is represented by Kate MacGarry in London and Gallery Side 2 in Tokyo.