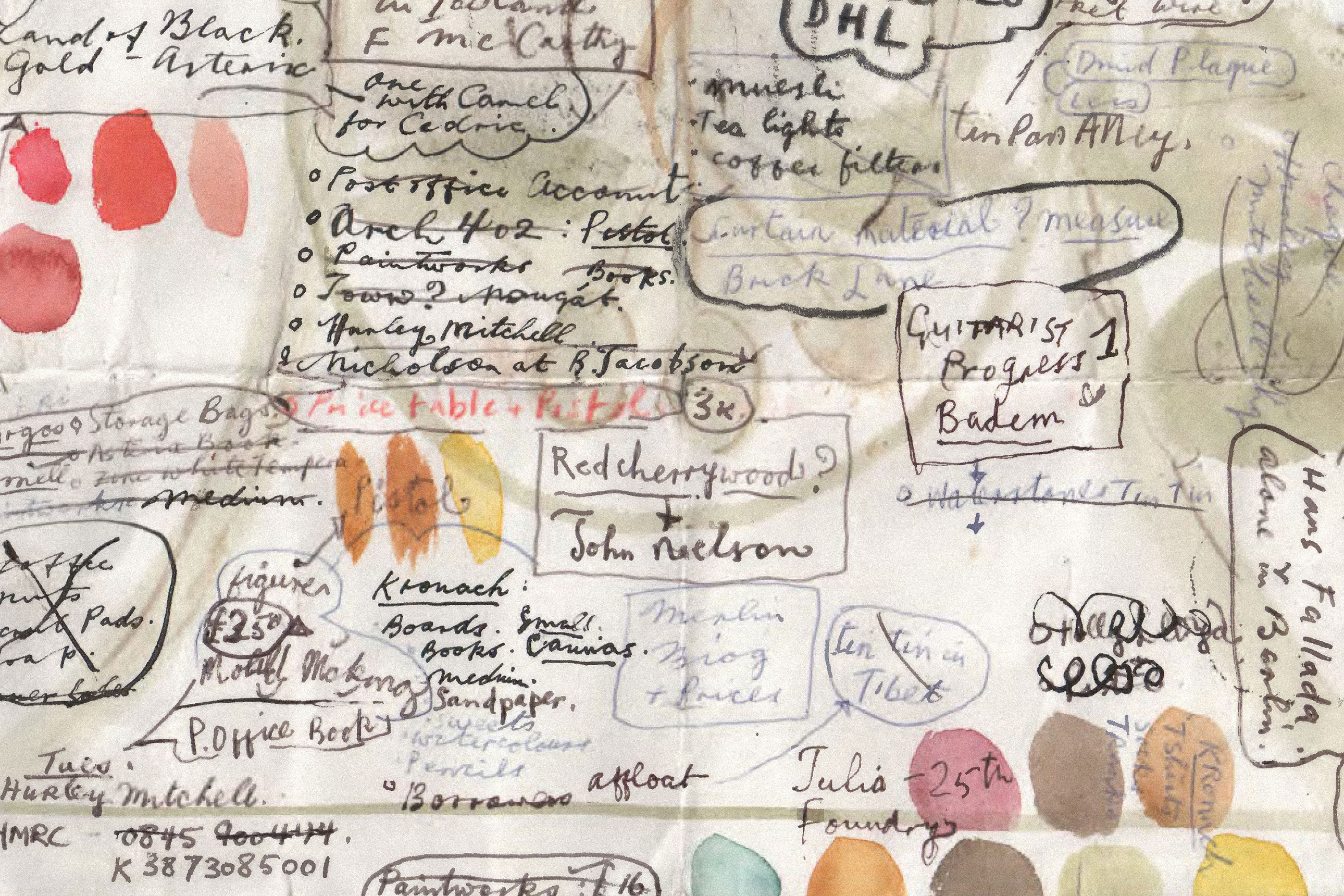 Exhibiting the work of Joel Tomlin and Roger Hilton, Women In Love conjures a dialogue between two British artists on the importance of craft and also the eternal relevance of simple materials and early tools.

Two figurative sketches of the female form have been selected for display by Hilton including one from The Night Letters. Produced during the final 28 months of his life, the celebrated tome was posthumously published in 1980, and illuminates Hilton’s thoughts on art, his encroaching death, the “irritations and pleasures” he experienced at his cottage in Cornwall along with myriad gouaches and illustrated messages he penned to his long suffering wife Rose. Confined to bed and subsisting on whisky and cigarettes, insomniac Hilton was “encumbered by peripheral neuritis into senility and helplessness.” As the critic Robin Blake observed, it was “impossible” for Hilton to produce the large-scale works in oil for which he became renowned — “canvases that hovered between abstraction and figuration.” Yet the female figures he rendered for The Night Letters, were masterly and revered for displaying a “Degas-esque lucidity and perspective.”

According to Joel Tomlin, Hilton’s depiction of women “went toward capturing the energy of primitive art. His practice as a painter focused largely on the alternation between purely abstract work and the depiction of female nudes, yet it is in the transition of this focus that my interest lay.”

“Hilton described his drawings as ‘an instrument capable of embodying man’s inner truths,’ and clearly display, with their dancing women and landscapes of febrile limbs, an impulse, just as Rodin before him, to seek a Dionysic relationship between the body and his art.”

Of the sculpture he produced for Women in Love, Tomlin writes: “My working materials, wood, copper, bronze and tin — all dealt with a nod to Art informel — display the ambition of making an object that is small and crystalline, yet contains the vestige of a legend. The wooden fig and the decorous pistol — both mute and incapable of practical use — are at once rendered with a purpose unknown and perform a piece of connective culture of what the Roman doorway would represent. A witty keepsake or portentous talisman.”

“The transitional aspect of the object interests me. A cauldron becoming a pelvic girdle, becoming a makeshift plinth. Speech bubbles of wooden smoke contain a copper asp; all culled from the vocabulary of early Modernism, or rather its forgotten byways. Those which did not express themselves as a clean Classical agenda, but concurred a lyrical impulse; Delving into oblique, flea-bitten stories. (I can only think of Ben Nicholson collecting the paintings of fisherman Alfred Wallis.) This was where inspiration was formed by the introduction of the folk object, giving rise to the sensation of irrational impulse, of hidden superstition.”

“The use of bronze in my objects is always in order to confer a particular thrall for, as a material, it has concerned itself with an epoch of human development.”