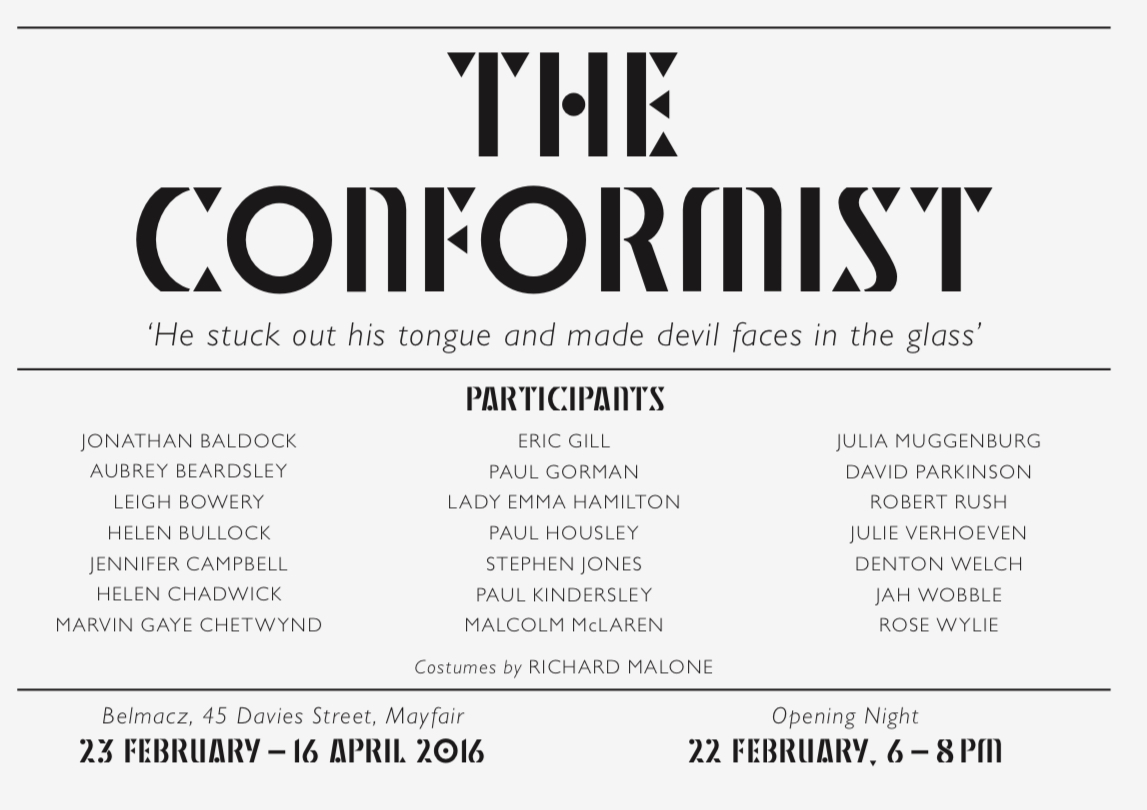 In 2016, Belmacz will present The Conformist. Organised by artist Paul Kindersley, the exhibition draws its title from Bernardo Bertolucci’s cult 1970 film — a study in the conformist psychology of fascism – and it poses the same questions of what it means to conform or to deviate. Ranging between aestheticism and attitudinizing, beauty and banality, the display moves from the eighteenth century to the present, to throw a spotlight on some of the eccentric, recherché and taboo aspects of creativity at different moments in history. The Conformist brings together some twenty artists, designers, writers, performers, utopians, outsiders, posers, perverts and other figures who have affronted or inverted the idea of ‘conformity’. By turns contemporary and arcane, gilded and abject, the exhibition celebrates those aspects of creativity that have skirted on the perimeter of the ‘mainstream’.

Running through The Conformist is a chorus of historical revenants and references, foremost among them the ghost of Lady Emma Hamilton (1765 – 1815), a low-born woman who became the wife of Sir William Hamilton — British ambassador to Naples and an avid archaeologist, volcanologist and collector. Emma was also notoriously the lover of Lord Nelson (her story was fictionalised by Susan Sontag in her 1992 novel The Volcano Lover). Abrasive and alluring, Emma charmed Europe’s elite with her performances of classical ‘attitudes’, or mythological poses. In The Conformist, she appears in the form of a print after one of George Romney’s feted portraits of her, and is also alluded to in a piece of jewellery newly designed by Julia Muggenburg, which invokes the English tradition of the commemorative jewel.

Hamilton’s persona — a crucible of erudition and eroticism, cultivation and crudeness — pervades The Conformist. It finds parallels in the outré drawings of Aubrey Beardsley — represented in the form of original copies of The Savoy, a short-lived fin de siècle periodical from 1896 — and the lives and works of figures including Eric Gill and Leigh Bowery, each of whom maintained a fine, fragile balance between flamboyance and reserve in their works and deeds. In its shape and sensibility, the exhibition also channels the spirit of Denton Welch’s 1944 novel In Youth is Pleasure, which evokes the author’s adolescence through a loosely-plotted sequence of eroticised sensations and visions.

Mirroring these disparate historical sources is a selection of contemporary art and design that echoes the variety of the German Rumpelkammer (a chamber of motley objects and objets, a trove of things ‘knocking about’ like so much antiquarian loot). Conceived as a grotto, the exhibition throws the concept of collecting into relief: individually and collectively, the artworks speak of the piratical desire that drives the collector (Sir William Hamilton was an insatiable hoarder of antiquities and contemporary art, erotica and esoterica).

Through disparate lenses, The Conformist will trace some of the shifting and contradictory fashions, fixations and subcurrents that have defined creativity from the days of Lady Hamilton to the present — profanity, romanticism, smut, beauty, camp, cliché, bloody-mindedness, exuberance, quiddity and vulgarity.

'The Conformist' playlist by Jah Wobble