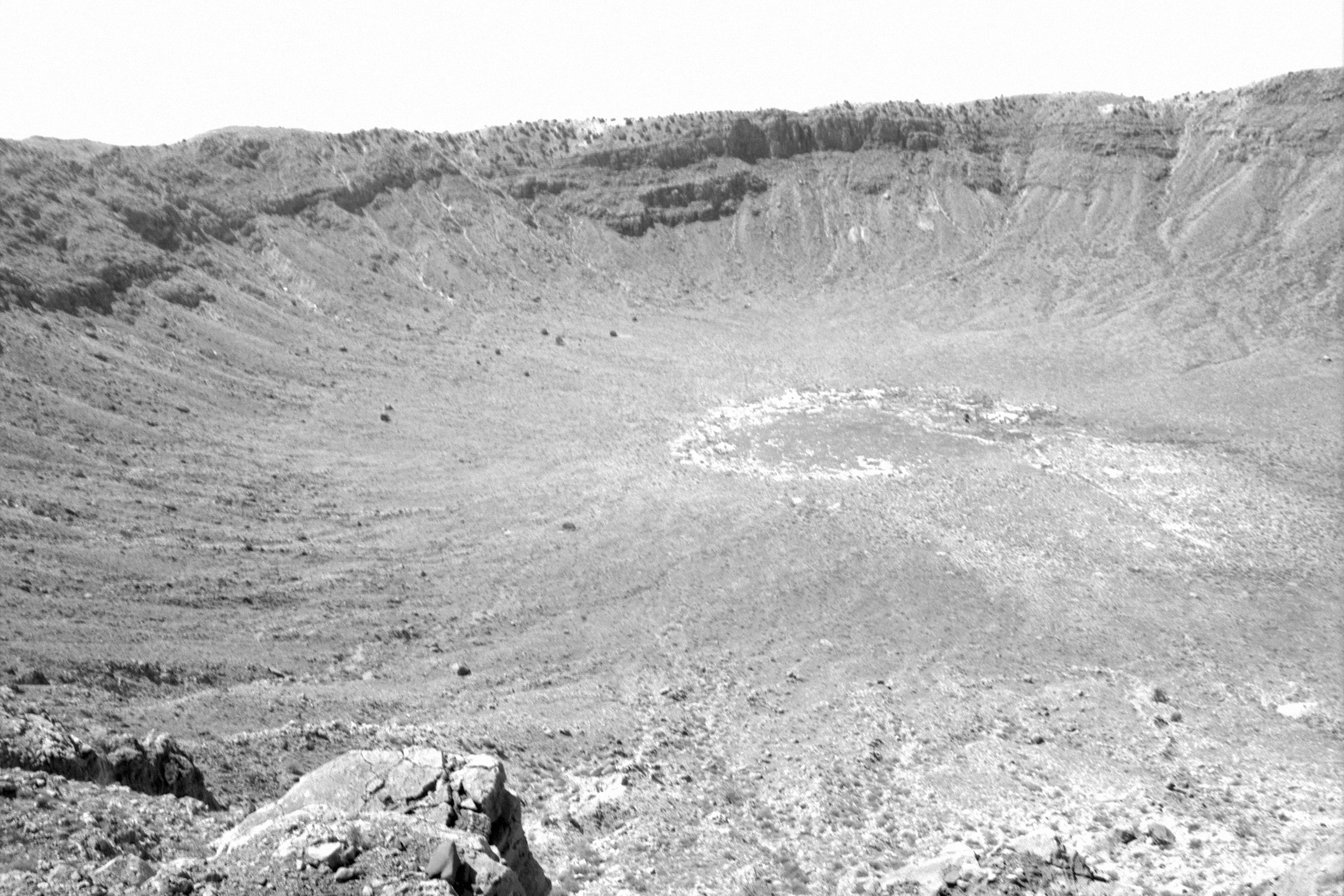 Searching for the Cold Spot

Julia Muggenburg is delighted to present Hanna Mattes’ first UK exhibition, Searching for the Cold Spot. The solo presentation is accompanied by the artist’s first photographic monograph of the same title.

Through analogue photographs, Hanna Mattes captures meteorite craters and the impacting cosmic rocks themselves. She traveled across the US and to the Canary Islands in search of craters made by hyper-velocity meteorites billions of years ago, photographing these deep and wide crevices in situ. Simultaneously, she scoured the mineral hoards of international Natural History Museums known for their collections of interplanetary impacting rocks: ores, opals and quartz crystals. After photographing the specimens in their displays, Mattes manipulated the negatives altering them by using watercolours thereby talking of the mysteries of the fantastical relics without bereaving them of their secretive undefined aura.

Mattes impacts the rocks themselves directly by layering and painting on each selected negative thus creating a reversed process-coloured photographic image. In the monograph and the exhibition her “hand impacted” work of meteorites is juxtaposed with her found impacted landscapes. Through these pairings, Mattes has developed a particular visual interpretation that operates outside the realms of both the documentary and the esoteric. Searching for the Cold Spot attempts to stimulate a metaphysical contemplation of the dual nature of the meteorite and its impact, between its life-giving¹ and destructive forces.

“Back to the collision: they happen all the time, you get a nudge, lose chunks, but you pretty much stay on course. I never know if I hit them or they hit me. Star-crossed orbits. (…) Existential collisions. (…) And that’s when it gets coldest, when you’re moving slowly and everything compresses. It’s some high-density shit, these cold spots and once you’re in, there are few ways out.”

Hanna Mattes was born in Germany in 1980 into a family of artists and filmmakers. Her upbringing highly informs her artistic practice. After working for some years in film production, Hanna started her academic journey in 2000 at the Freie Universität Berlin studying Linguistics, Science of Religion, and Indian Philology to better understand the beginnings of language, thought, and spirituality. Shifting her focus to the visual arts, she completed a BA at Gerrit Rietveld Academy Amsterdam, in 2006. Her examination work was nominated with the Rietveld Prize and the Art Olive Prize for young artists. Lastingly influenced by her initial academic experience, Hanna continues to look for epic stories and legendary places that shape our world and her body of work.