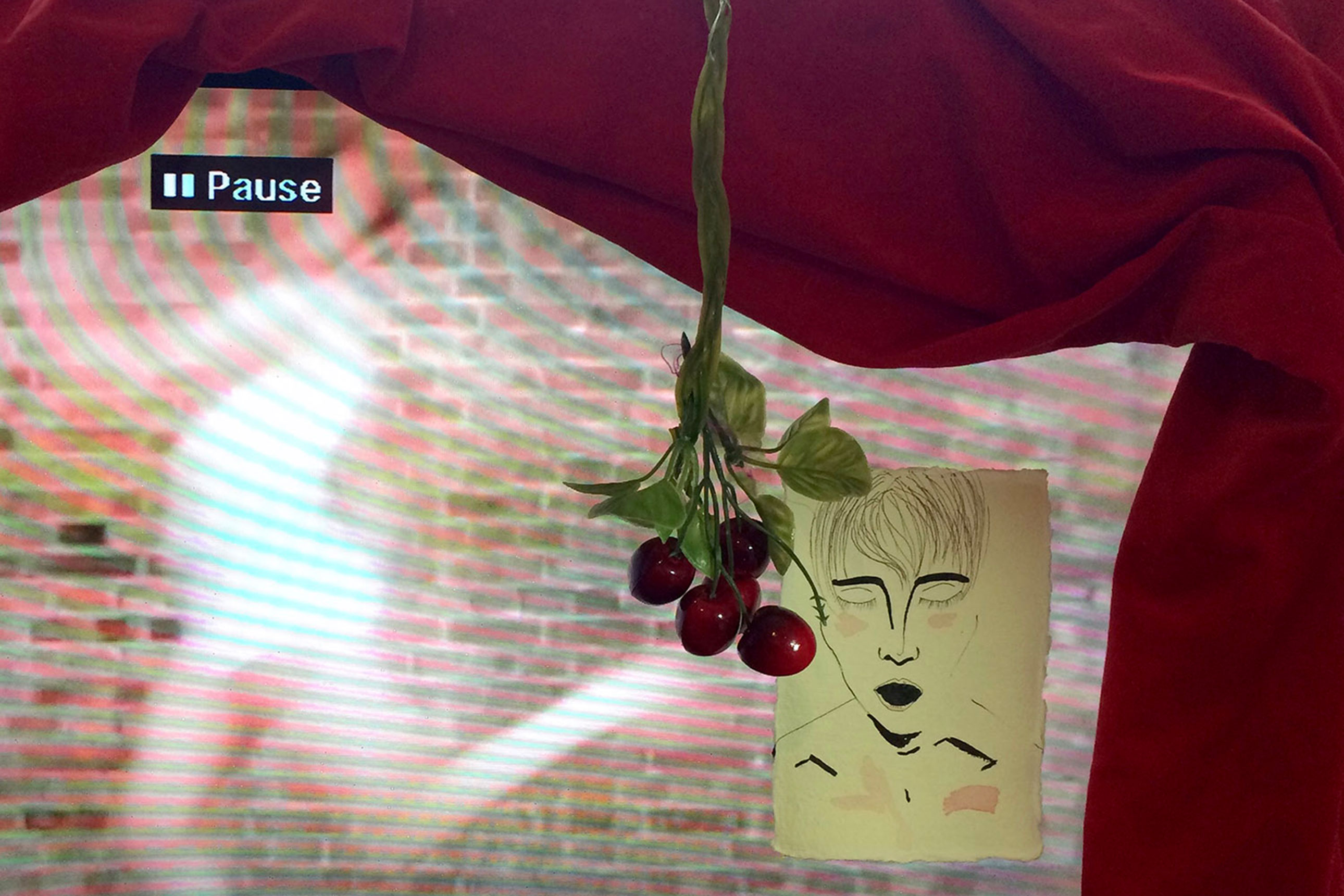 The exhibition revolves around Kindersley’s first feature-length film, Das Spiel der Hoffnung, a vampire flick cum family drama set in an English country house. The various components of the display — videos, drawings, texts, textiles, objects and objets — translate the film’s scenarios and personae into physical form, filling the intimate setting of the gallery. Through a confusion of décor, drapery, cast-offs and curios, the installation evokes an interrupted mise en scène — or a sequence of unresolved moments plucked from fiction and history. The space of the gallery has been curtained-off into numerous compartments, mimicking and miniaturizing the rooms of a house. Diverse objects have been arrayed on shelves and inside cabinets to suggest a private collection — non-hierarchical and steeped in personal meaning. Alternately symbolic and matter-of-fact, the items are poised between the status of real-life ‘personal effects’ and stage props, the residues of a performance. The diverse elements of Kindersley’s display hold up a mirror to the film, glancing at its ambiguous characters, open- ended script, manorial setting, ad hoc casting and prolific references. In the window of Belmacz, in contrast to the closeted interiors of the gallery, Kindersley will install a bed — creating a bedroom open to the world, or a ‘space to hang out in’. Das Spiel der Hoffnung will be premiered in June to coincide with the exhibition.

Transforming the cabinet-sized gallery through backdrops and screens, Kindersley has deployed domestic furnishing and decoration in the creation of a ‘performative space’. In this regard, his work highlights the often-overlooked connections between the ‘expanded field’ of contemporary art and the collaborative ventures of British Modernists in the early twentieth century, in particular the artists and thinkers loosely defined as the Bloomsbury Group.

In its manifold layers and spiralling allusions, the exhibition channels the polyglot and precocious world of Bloomsbury, where lives and art intertwined to create a milieu known as much for poetry and painting as for music, interior and garden design, and sexual licence. Unlikely connections between ‘then’ and ‘now’ are characteristic of Kindersley’s work: discrete categories and complexions of art are gleefully interposed and broken apart. Portraiture, still life, internet clips, floating quotations, sentimental keepsakes, aestheticism, eroticism and esoterica – all are cut together to produce a crucible in which fact and fiction, reality and memory, are shifting sandbanks.

The exhibition foregrounds the idea of the domestic interior as the site — and the subject — of art. According to Kindersley, the physical spaces of the gallery become a way of showing “how we are affected by our surroundings and they become us as much as we become them”. He has created a progression of decorative micro-rooms, throughout which the screen or curtain performs an ambiguous role, guiding and frustrating visitors’ passage through the space, and at once implying a barrier and a conduit. Living space also functions as a platform for performance and experimentation, in the spirit of the Modernist performance piece Façade — An Entertainment by the poet Edith Sitwell (1887 – 1964). Façade was a recitation of Sitwell’s poems to the music of William Walton (1902 – 1983), which began as a private performance in the poet’s house, and was later delivered to large audiences. In its later versions, Façade was performed behind a curtain via a hole in the mouth of a painted face, with the poetry recited through the hole with the aid of a sengerphone. Sitwell commissioned famous artists to make the backdrops (or façades): a performance at MoMA in 1949 featured designs executed by the Spanish painter Esteban Frances, projected on a screen through which Sitwell’s voice and the instrumental music were amplified. In the exhibition at Belmacz, Kindersley plays upon — and amplifies, in turn — this strange and hybrid work of art, drawing out its subliminal eroticism.

The façade recurs throughout Kindersley’s work as a literal and metaphorical motif. In Sitwell’s brand of Modernism, the screen was a literal device for realising the Modernist principle of impersonality. (Of Façade, Edith wrote: “The manner of presenting the work was the idea of Sir Osbert Sitwell [her brother], who devised the use of curtain and mask in order to eliminate the personality of the reciter.”) This concept of personality, and the degree to which it is fluid and transformable, is ever-present in Kindersley’s videos and photographs. The majority have placed him centre-stage, playing myriad roles: as Guardian critic Adrian Searle has noted, “His preferred medium is his own body, having posted hundreds of images of himself in innumerable poses, guises and situations (most of which he concocts at home) on Twitter, Facebook and Instagram. Using paint, make-up and costumes Kindersley’s work is a kind of free-access public sketchbook.”

By contrast, Kindersley’s new film sets him at one remove, directing rather than featuring in the action (in a move analogous to Sitwell’s masking of herself). Das Spiel der Hoffnung deploys the stock story of a family thrown into disarray by a manipulative child, splicing that narrative with elements of other films – from highbrow and esoteric cinema to horror and 1970s family melodramas. The same combination of sophistication and schlock pervades the Belmacz exhibition. As in many of Kindersley’s works, Das Spiel der Hoffnung blurs the line between actor and character, with elements of the actors’ real lives and selves seeping into the story. Each performer was found online, via Facebook and Instagram. The ways in which online friendships flourish and unravel (either into fantasy or clinging dependence) is examined through the metaphor of vampirism. Reflecting the generic layers and shifts of the story, the house itself is a hybrid entity — a sixteenth-century pile which has been annexed and overlaid with later styles, and which itself becomes a kind of character in the drama.

Kindersley’s exhibition extends the film’s interest in interior space as a projection of selfhood, collapsing together different fictions and histories. The exhibition in its totality may be conceived as a splitting or multiplication of ‘persona’ into a louche and lustrous array of things. At points throughout the duration of the exhibition, Kindersley will be in the gallery — sometimes occupying the bed in the front window. The bed as a site of retreat, posing, and self-fashioning invokes numerous precedents: Sitwell’s apercu that “All women should have a day a week in bed”; or the behaviour of her contemporary Stephen Tennant — the louche novelist manqué who led the Bright Young Things circle of the 1920s, and who would take to his bed for months at a time. Then there is the more recent case of Leigh Bowery’s legendary ‘bed in’ at Anthony d’Offay Gallery in 1988, for which he lounged on an ornate couch before a two-way mirror, witnessed by visitors through the glass.

As throughout Kindersley’s work, these precedents — never as direct as quotations, and yet never entirely accidental – are channelled into a project that is disarmingly casual, offhand, and real. Kindersley has explained his current film work in terms which encapsulate his art in general: “It’s driven by impulse, improvisation and reference — but has to be in the moment.”