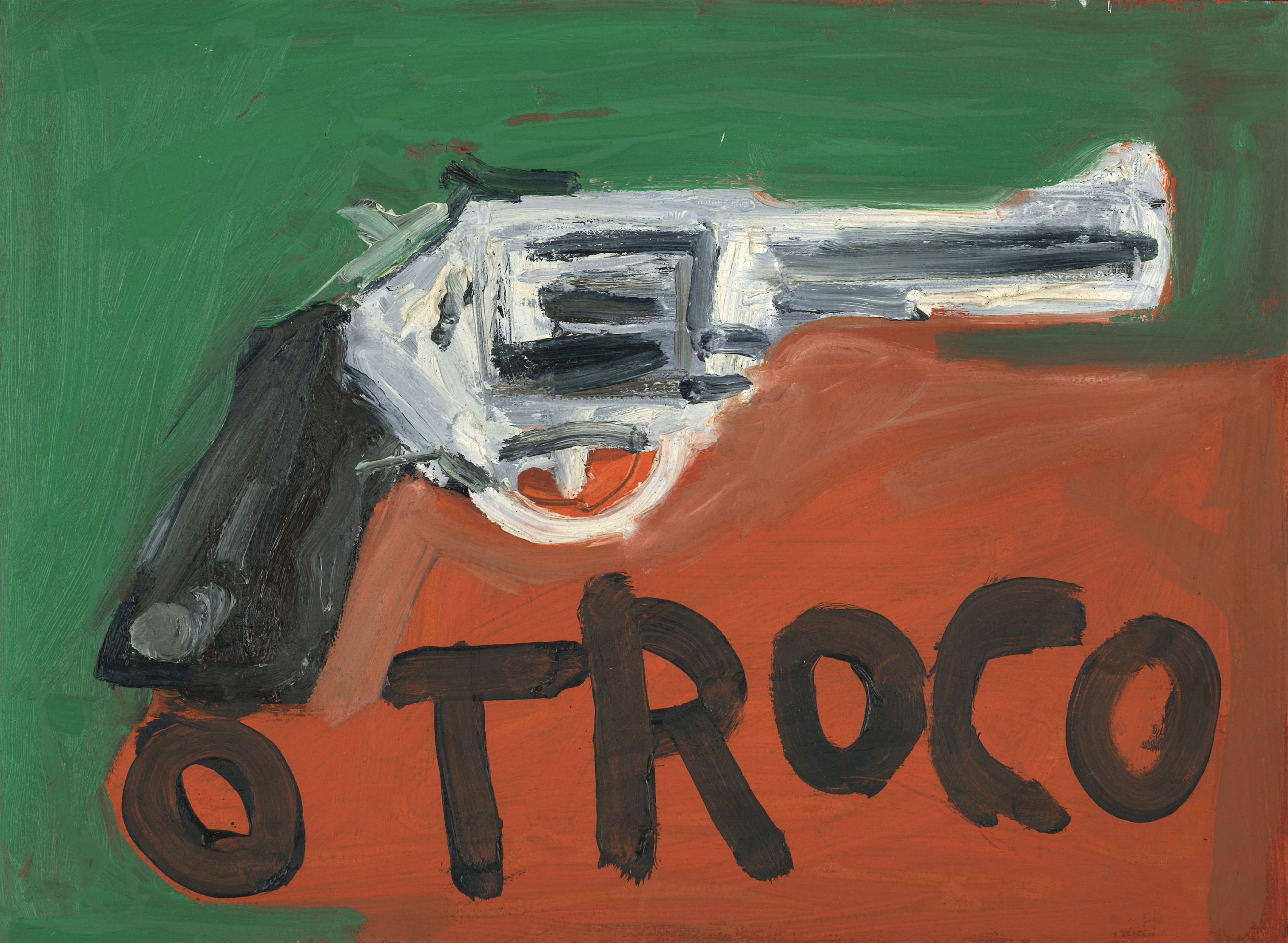 When Joseph Beuys flew to America for his 1974 performance I like America and America likes me (a performance in which he would spend three days in a gallery living with a coyote), the German artist, wrapped in his signature felt, was carried on a stretcher from the aircraft door to the exhibition space as he refused to touch the soil of a country he considered a divided nation. Taking this canonical gesture as a starting point, this exhibition explores ideas around politics, social division, mysticism, mythology and nostalgia through the work of eleven Brazilian artists. It also critically asks what legacy might this European artist have to a group of South American artists almost half a century on? Titled with a hint of irony I Like South America and South America Likes Me, made its journey across the Atlantic in a suitcase made by artists Randolpho Lamonier and Nolo. Appearing in London luridly packaged within a pastiche of ‘tropicalia,’ the work, in itself titled Mula, introduces a ‘beauty and the beast’ portrait of life in Brazil into a contemporary art system; a portrait in which cliche rubs up against social reality.

Familiar within Brazilian favela culture, the hand crochet caps of Crochê de Vilão, though not typically classified as art, use a complex and sophisticated language formed of appropriated characters from popular culture. We see various grotesque clowns, a symbol employed to bait the police; and Scrooge McDuck, synonymous with greed, held up at gunpoint. Crocheting is often taught within prison education programmes and now has a small but devoted following among the youth who live on the peripheries of Brazil’s biggest cities. These young people have turned crocheted apparel into a powerful and political symbol of resistance.

Andréa Hygino’s wood prints, collectively titled Press Proof, are made using defunct school desks. Children scratching into desks is in itself a rebellious act, but also a form of self-expression, even artistic expression, so it seems a pertinent image to discuss the underfunding of public education in the country, a collective image of resilience formed by many hands over time.

On discovering the death of Beuys fell on the same date as his father, Bruno Baptistelli has made a new series of drawings, titled JB-GB, especially for the show. These mix that date and other numbers that connect the two men, to co-opt the folklore of Beuys, overlaying it with the artist’s own personal mythology, a deft mix of conceptualism and autobiography that is the São Paulo-based artist’s calling card.

The body is central to the work of Anderson Borba, be it through his use of textiles that reference clothing, or in the evident labour of his hand-carved wood sculptures, works that often feature images of bodies, occasionally homoerotic, torn from magazines. Here Borba presents a sculpture created using a cycle helmet to which he has added another layer formed of industrial ropes and pigments that trace and dissect its form while being reminiscent of corn rolled Afro hair. This new hybrid object hangs mask-like, retaining the protection inherent in the original object, but with a more nuanced form than the mass produced and typically homogenising plastic beneath.

The paintings and drawings of Allan Pinheiro, often made on found material, attempt to distill the urban flow of Rio de Janeiro and the city’s distinct social realities. Moved by concerns arising between structural and cultural clashes, a wide range of motifs reference street language, power structures, work relations, sex, violence, addictions and religion, immersing the viewer in what the artist terms a ‘cosmovision’ of the city’s daily life.

Goiás-based André Felipe Cardoso’s collage works also incorporate found materials, introducing images that carry a sense of ‘saudade’: a feeling of longing, melancholy or nostalgia supposedly characteristic of the Brazilian temperament, and commonly evoked in music and poetry. Sourced from the streets and local markets, these fragmented images often feature landscapes and lone figures, pictures that might offer a romantic glimpse of a Brazilian past with their faded and worn surfaces. Nonetheless, the tactility of their new form places them firmly in the present. Likewise, Janina McQuoid also layers and translates found imagery, the artist shifting the source material through multiple mediums and often rendering her starting point indecipherable. In a back-and-forth between the familiar and the uncanny, each painting or sculpture burlesque fantastical visions: Rabbits Ring-Around-the-Rosy From Mud To Drama, on display here, features the animals in a state of struggle, caught between a state of animation and stasis, a fictional realm made highly tactile.

It is perhaps unsurprising that an artist producing in São Paulo, a city nicknamed ‘Gotham,’ might fashion objects that mix sensual pleasure with horror, humour with anxiety. Yuli Yamagata’s predominantly textile-based sculpture and wall works combine imagery of body parts, motifs of nature and the detritus and off-cuts of consumer culture into amorphous forms. In Meta Meta, 2021, made in collaboration with goldsmith Bruna Magalhães, a solid piece of gold form appears to give life (with the help of some Duracell batteries) to a typically monstrous Frankenstein-esque creature.