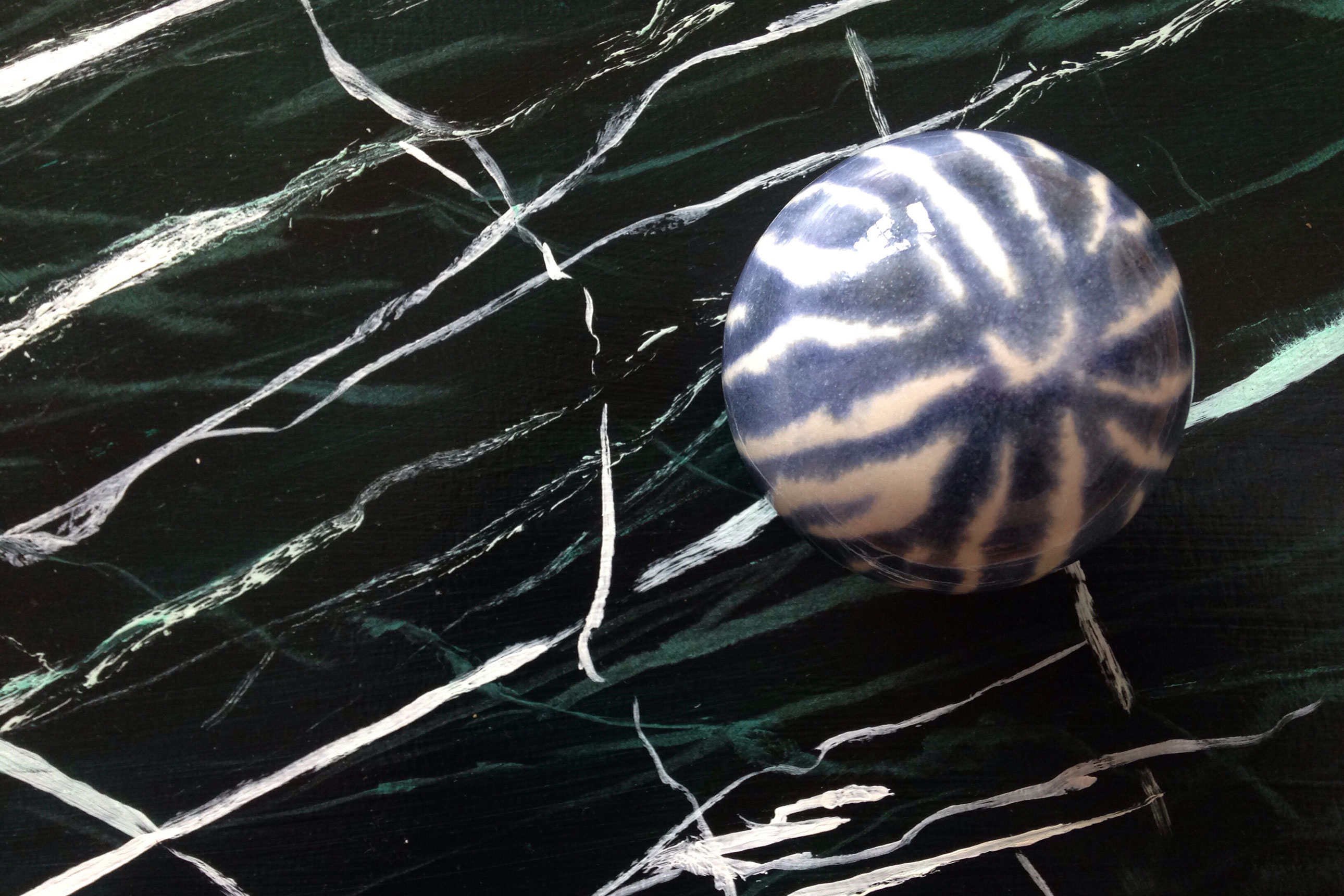 from form to public

A sense of precision criss-crosses Crampton’s installations creating a sense of deliberate display. There are angles, planes or facets on metal, cut hardwood, hammered sheeting and smooth paint, faux finishes, woven fabrics and glazed ceramics, accentuated textures which vie for the viewer’s attention. These contrasts are commanding as they confront the viewer. Stately sculptures come out of simplified jigsaw. The palette of colours gentle, at times feminine, is off set with flat, saturated inks against dull tonalities reminiscent of waiting rooms of the 21st century.

Confident, the works coexist and rival each other to create a visually soothing, pared down prism of the artist’s repertoire, not unlike a meadow, a bower- private yet accessible. At times installed there to stimulate the spectator. Objects are at play, they take over the stage. Feeling of utility in the works’ shapes indicated by the strictness of form, is misleading. A negation by the carefully rendered faux finishes permeates the works. Black and white starkness suggests mixed emotional aggregates. These pieces are not what they seem…

Taken from the historical language of embellishment within the domestic sphere and the everyday useful object, these works become more than they proclaimed to be at first. Under the guise of a refined, somehow, exotic camouflage of saturated paints, knitted patterns out of cinquecento, deliberate marks and splattering, strings and fringing, the artist’s effigies turn into suggestions of something else entirely. They are hieroglyphs and references to ascetic representation, no details seemingly superfluous, but absolutely necessary. Objects take centre stage and turn important. From the modest thrown clay pot to the braided matting, is Crampton ‘s endeavour where modesty and pomp collide.

She found in things collected — the bird — a way to cultivate space.
No matter what is put together, a sense emerges all her own.

Things weighing grams
Under soft roofs —
let’s rehearse in the garden below your shelter.

In movement we will live
Without loss
A place in the garden
Below the sky
Above ground
Cancel the summer.

She, The Dawn, a bird, whispers creakingly into the ear of The Day.

Day
Open your attention to twilight
Your ignorance does not fool me surrounded in light
No garden in the sun is without lies
No dwelling is a shelter unless it purports to sustain —
me, the transition between one thing and the next.
In flight I want you and not on Earth,
in lines drawn by memory,
in soft feathers and in the most beautiful colours.

The Day replies.
Perhaps you’re confused, as birds do not appear between —
always at night or in the day
Lines are not drawn by memory but by hard forgetting
Spaces are created marked-out by monochrome deviations
They represent contrast
Unlikely transitions.

The Day is bound to old ways
Twilight into all you need
What do you need?
A dwelling?
You are a bird
You are lost.

The Day is its own house, soundly built, weighted down
All birds fly away when the light floods in —
when I come
You will die
Trapped between soil and the Empyrean
Combusting in song.

The bird responds, no longer she.

Mr. Bower made a hat from the curved and dried bale of hay in the field next to his house. After painting it and decorating it with metallic objects, he gave it to his wife. She was not impressed. A hat she wanted, but not one made by hand by a man who had little skill in this regard.

Mr. Bower’s wife had just had her hair cut and done. Died silver, it shone so brightly it could be seen as a second sun from the other side of the neighbour’s farm. So much so, the farmer crashed his tractor into a fence when blinded by it.

Until midnight Bower’s wife stayed outside in the cold, disappointed that when the sun went down her hair was no longer lit by it, nor in competition with it either. She paced the garden and shouted at her husband in such a way that her voice boomed off the external brick walls of their house and all around the garden.

“Where’s my hair praise?! Where’s my dinner? Why is there hay all over our driveway.”

Mr. Bower offered no reply, asleep in the spare bedroom.

The next morning the farmer called the John Deer repair man and watched on as he assessed the damage. “Neighbours”, he exclaimed, “why do we have them!”.

The mechanic took this rhetorical question to heart and replied “You’re a farmer and your neighbours are far away.”

“Yes”, the farmer responded, “my neighbours are as far away as a second sun but they nonetheless blind me and make me crash my tractor.”

Losing your hearing in a room

you are pleased by is not pleasant.
All one’s senses are required when,
in the middle of pleasure,
getting to the end of the experience
is the most important thing.

Some birds modify their surroundings
Empty,
then less so.

eventually full.
Swoop down, whoosh in the ears —
something collected.

Something made
Some things are a catastrophe
turning one thing upside down to reveal the character of
another.

'Bowers: from form to public' Publication